This super creamy and deliciously cheesy homemade vegan mac and cheese recipe will take you straight back to the macaroni and cheese from your childhood!

The best vegan macaroni and cheese

Growing up, my mother was usually the one who cooked for us, preparing elaborate and wholesome meals from scratch, with plenty of vegetables.

Although I haven’t eaten the boxed Kraft version in years, I still love my mac and cheese with a ton of extra cheese sauce.

Also be sure to try this Vegan Chocolate Cake

The vegan macaroni and cheese recipes out there are definitely hit or miss. And the bad ones truly are awful.

I remember back when I first went vegan, trying a recipe that attempted to mimic the cheesy taste by using a combination of nutritional yeast, miso, and Dijon mustard.

The vegan recipe claimed to taste just like real mac and cheese. Spoiler alert: it didn’t even come close.

I’ve also tried some vegan restaurant versions or packaged varieties (not naming brand names) so far away from tasting anything like mac and cheese that I honestly don’t know how they ever made it onto shelves.

With this simple vegan mac and cheese recipe today, I’m not going to tell you it tastes exactly like Kraft or Velveeta. But it is absolutely delicious in its own right and completely satisfies even my strongest mac and cheese cravings.

The nondairy recipe has received a resounding stamp of approval from every non vegan who’s tried it, which is hugely important to note, because if someone who remembers what traditional mac and cheese tastes like says it’s good, you know it must be true!

I’m not saying vegans have inferior taste buds (obviously my taste buds are super awesome), but I do admit that sometimes we can get excited about a dish simply because a plant-based version is offered.

Those vegan cannoli that tasted like someone who’d clearly never been to Italy had simply stuffed vanilla frosting into a cannoli shell… were they they best cannoli I’d ever had in my life? No. But on the other hand, I got to order vegan cannoli on a restaurant menu! So actually yes, best cannoli ever.

What ingredients do you need?

To add thickness and creaminess without flour or heavy cream, I turned to cashews this time, which gives the sauce a rich and velvety texture.

You can sub macadamia nuts for a low carb version. Or I’ve also linked a nut-free and soy-free vegan cheese sauce in the recipe below.

Unlike many other dairy free macaroni and cheese recipes online or a box of Annie’s vegan mac and cheese, this one has no butternut squash, cornstarch, or cauliflower, although I do also have a Cauliflower Alfredo Recipe on the blog.

The classic orange color and rich flavor are thanks in part to a surprising antioxidant packed healthy ingredient: roasted carrot!

If you want to make mac and cheese without nutritional yeast, just use the shredded vegan cheese option instead. Vegan cheddar, mozzarella, 4 cheese Mexican blend, Parmesan, or Monterey Jack all work.

What kind of pasta works best?

Pretty much any noodles will work here, and whole wheat or gluten free pasta is fine to use as well. I’m partial to tube noodles because they trap more vegan cheese!

For the photos, I really wanted the recognizable Kraft pasta shape but couldn’t find it anywhere. So I ended up buying boxed vegan mac and cheese and used my own sauce recipe instead of their packet.

The cheese sauce can be used with much more than just pasta.

If you’re on a keto or low carb diet or simply don’t feel like boiling noodles one night, feel free to use the sauce as a cheese dip or pour it over steamed veggies, cauliflower rice, baked potatoes or sweet potatoes, or even spaghetti squash.

(My recommended method for cooking the best spaghetti squash in the oven or microwave can be found here: How To Cook Spaghetti Squash.)

You can bulk up the mac and cheese by stirring steamed or roasted veggies in at the end. I especially love adding chopped steamed broccoli.

Or give the pasta a protein boost by adding crumbled tempeh, baked tofu or seitan, or your favorite protein of choice.

Above – watch the vegan macaroni and cheese recipe video

How to make vegan mac and cheese

Start by completely covering the nuts in a bowl with water.

Let them soak anywhere from 2-6 hours, or refrigerate and soak overnight, then drain fully and pat dry.

Combine all of the vegan mac and cheese ingredients (including 1/2 cup water, but not including the optional cheese). Blend in a blender or with an immersion blender until the sauce is thick and completely smooth.

Transfer to a small saucepan and heat to your desired temperature, stirring the optional cheese shreds (such as Daiya or Follow Your Heart or Miyokos) in at the end.

Leftover vegan cheese sauce can be stored in a covered container and refrigerated for up to 5 days. Or it can be frozen to thaw and reheat at a later time.

An easy recipe for how to make vegan mac and cheese that even non vegans will love. 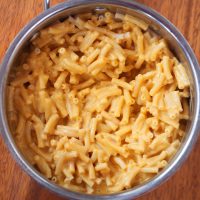 The recipe was inspired by this Vegan Alfredo Sauce Recipe.