Nutrition facts are based on the standard 1/2-cup serving size (of which this recipe yields about 10). However, I don’t know anyone who actually only eats one serving of ice cream (same with cereal servings)… so don’t take this info to mean you need to stick to one serving.

Even eating three servings of this recipe won’t get you up to the same amount of saturated fat, calories, and cholesterol of one serving of Ben&Jerry’s. 😉

For the “butter”: You can probably substitute oil or even peanut butter (or cashew butter or Sunbutter). Of course you can omit the fat completely… but don’t blame me if it doesn’t taste as rich and delicious!

For the raisins: I haven’t tried this recipe without raisins. I’m sure it would “work” but you’ll probably want to add some extra sweetener to make up for the natural sweetness of the raisins.

For the sweetener: I’ve never tried making ice cream with xylitol, so I have no idea if it’d work as a substitute. Evaporated cane juice or regular sugar or even Sucanat can be substituted, but the flavor will be different. All other substitutions, you’ll have to try at your own risk.

Choice #1: Freeze the liquid mixture, then re-blend in a Vita-mix or Blend-tech.

Choice #2: Freeze the mixture in a shallow container. Every 45 minutes (for up to 4 hours), stir the slush. Yes, this takes a while, and it will also never yield as creamy of a result… So if you’re really serious about ice-cream making, you might want to think about investing in a machine. My Cuisinart Ice Cream and Sorbet Maker was only $40; it’s a one-time purchase that gives you enjoyment for years!

Choice #3: Forgo the ice cream and pour the liquid mixture into popsicle molds (or paper cups) instead.

If you have an ice-cream maker that looks like mine (shown below), make sure it has been frozen for at least 24 hours prior to using and is solid like a frozen brick. If the base is even the slightest bit unfrozen, you will only end up with slushy ice cream.

Homemade ice cream is best served the day it’s made, but it still tastes delicious for up to a month in the freezer (in an airtight plastic container). If you freeze for more than a day, you’ll probably end up with a frozen block, so just be sure to thaw the ice cream for 15-20 minutes prior to serving. 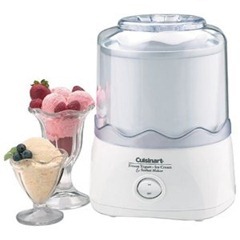