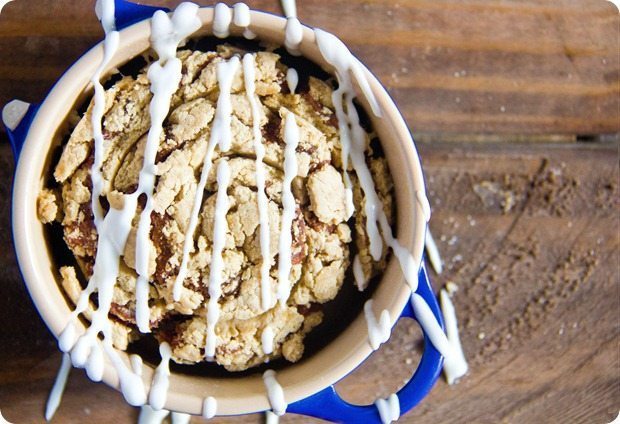 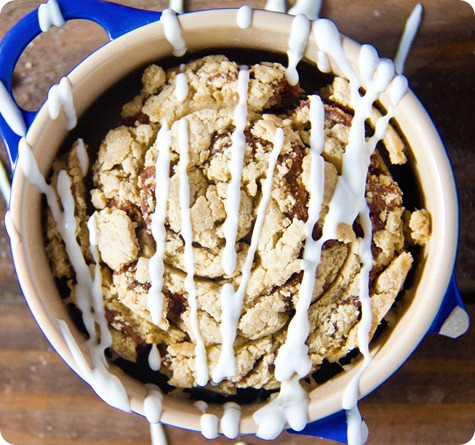 Immediately, I fell in love with not only the beautiful photography on her blog, but also with her catchy—and often humorous—writing style (see below). Oh, and the fact that she has a recipe for single-serving cinnamon rolls… How can you not instantly love someone who releases such a recipe into the world? 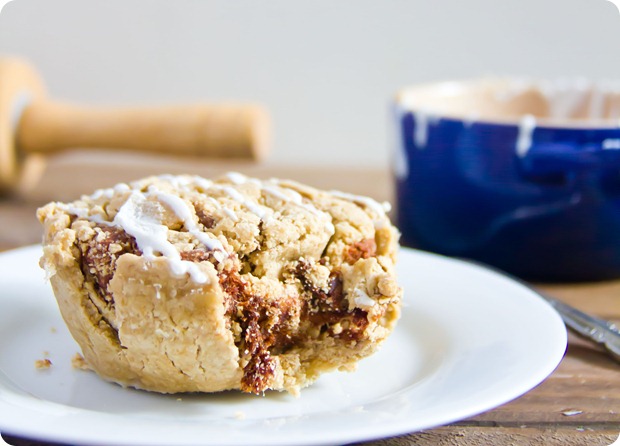 Hi everyone! My name is Kylie and I make up recipes over at Yeah…immaeatthat.

We should just get it out of the way now…I am a complete Chocolate Covered Katie fan. I first realized Katie was an absolute genius when I made her peanut butter cookies. If you read food blogs, you most likely feel the same obsessive love for peanut butter that I do. Have you made those cookies? Goodness, you must.

I don’t think I’ve ever met a cinnamon roll that I didn’t like. Some people get critical when there are raisins or pecans involved. I pass no judgment…only unconditional love. I just really tend to love cute food. And what is cuter than an individual cinnamon roll all cozy in its own little ramekin? Very few things…maybe only like chubby Labrador puppies and that panda sneezing video that we’ve all seen by now. 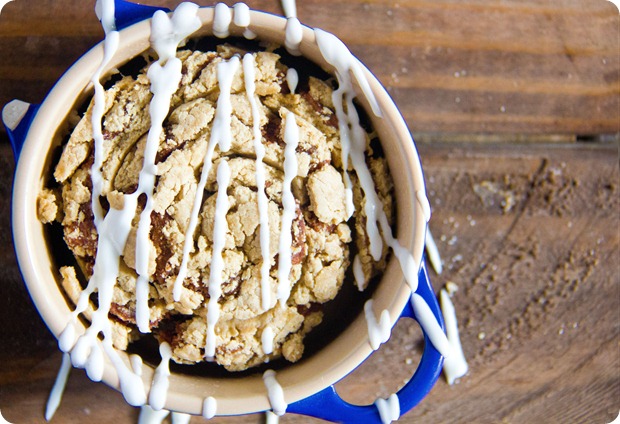 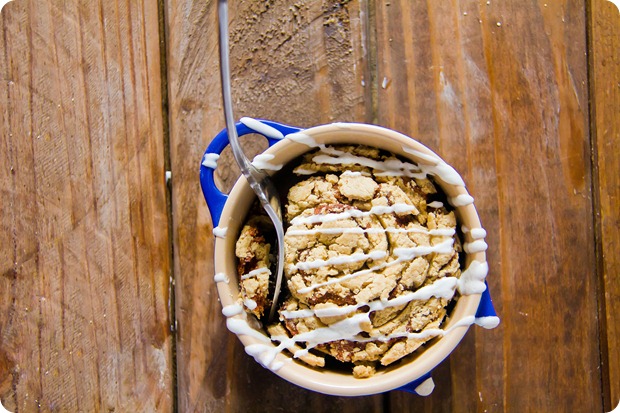 But seriously though, cute-little-single-serving foods are a necessity for me because I live with a husband who says things like “I’ll just have a bite of dessert”…and then does. It’s fascinating to see. How can one just have a single, tiny bite and then stop?! So baked goods in the house tend to get consumed by me and only me. Do you see the necessity for cute, single-serving foods? When we got married, I registered for like 3 cookie jars…none of which are being used now since I’m the only one getting excited about cookies around here. He does fah-reak out over cherry pie though. So there is a sliver of hope.

For me, cinnamon rolls > cherry pie. Mainly because I can barely count all the things that I love about cinnamon rolls. It’s like eating a cake for breakfast. Which is just a happy thing to do every once in awhile. Plus, they’re rolled and wrapped like a little present with a gooey center. (Don’t even get me started on the crunchy vs. gooey cookie debate. Gooey cookies for liffeeee.) 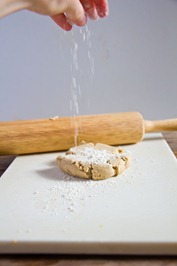 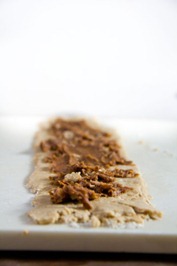 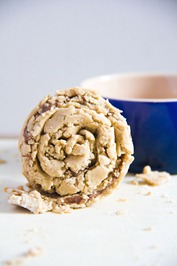 It should also be noted that I tend to like things better if they remotely remind me of cinnamon rolls. For instance, I made salmon pinwheels for dinner the other night and I think I liked them all the more because they reminded me of cinnamon rolls. Not their flavor (obviously), but the whole getting to unravel the food as I ate it. Just like a cinnamon roll. Kind of.

And it would just be wrong on all the levels to talk about cinnamon rolls without mentioning frosting. Now I have improved my healthy frosting making ability since posting this original recipe. So if you’re thinking you want something a little more exciting than a yogurt drizzle as a ‘frosting,’ I completely understand. Just simply combine 1 tablespoon peanut butter + 1-2 tablespoon plain yogurt of choice + a touch of liquid sweetener of choice (if desired). That is frosting perfection. And now you have a cinnamon roll with peanut butter frosting. Sometimes, like this time, the world is such a happy place. 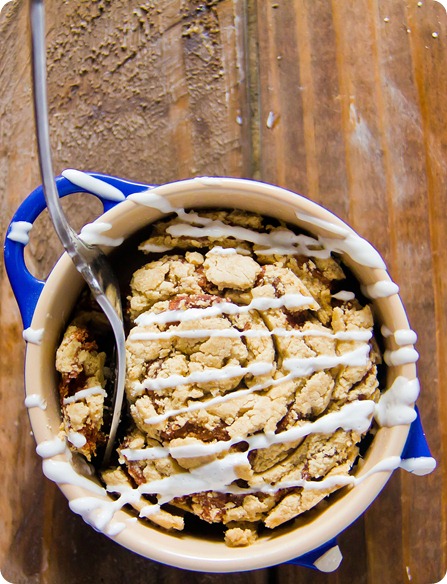 Cinnamon Roll for One

In a small bowl, combine oat flour, baking powder and salt. Add in coconut oil and mashed bananas. Stir until a dough is formed. Roll dough into a ball. Set aside. For the filling, cut pitted dates into pieces and use the back of a fork to mash them into a paste. Add in cinnamon and continue to mash together until cinnamon is incorporated into the mashed date paste. Sprinkle a flat surface with oat flour and roll out the ball of dough into a LONG rectangle. Make the sides of the rectangle straight by using a knife to slice off the uneven edges. Press the dough you cut off back into the rolled out dough and continue to roll the dough into an even longer rectangle. Spread the cinnamon-date paste over the rolled out dough. Fold the dough in half LENGTHWISE. Now, roll up the folded over dough into a pinwheel so that it makes a cinnamon roll shape.

Place rolled up cinnamon roll into a large, greased, microwave-safe mug or ramekin. If desired, gently press the cinnamon roll down so it takes the shape of your dish. Microwave for 1 1/2 to 2 minutes. (CCK note: This cinnamon roll recipe can also be baked in an oven if preferred. Try 330 F for 10 minutes as a starting point.) Remove from microwave and top with ‘icing’ if desired. Serve hot. Serves 1. For troubleshooting or substitution questions about Kylie’s recipe, feel free to visit Kylie’s site and ask her any questions you may have! 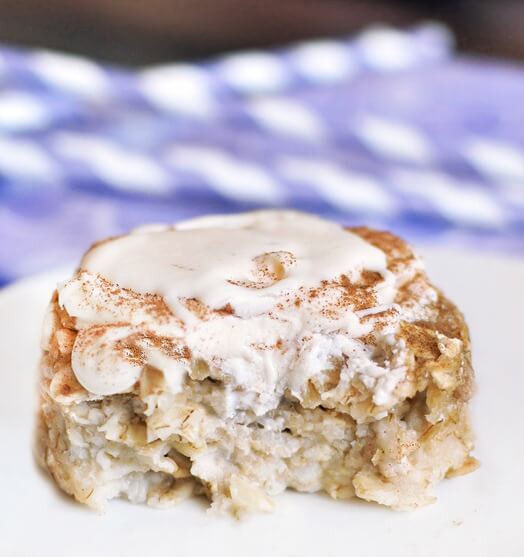 Banana Bread In A Mug