How to make your own secretly vegan donuts at home – the super easy recipe, with just 8 ingredients!

Can be oil free

The best part about these vegan donuts is that the recipe is so simple you might already have all of the ingredients needed to make them right now!

The donuts are baked, not fried, and there are no flax eggs, no yeast, and no crazy ingredients – they taste like regular donuts because they ARE regular donuts!

Peanut Butter Donuts: Follow the recipe below, subbing 1/4 cup peanut butter for all of the oil.

Vanilla Glazed Donuts: Make the basic glaze and donut recipes, both included below in this post.

Vegan Chocolate Donuts: Replace 1/4 cup of the flour in the recipe below with unsweetened cocoa powder. Dip in melted chocolate.

Coconut Donuts: Use coconut milk as the milk of choice in the below recipe, and replace half of the vanilla extract with coconut extract. If desired, top with frosting or coconut butter and toasted shredded coconut.

For chocolate frosted donuts, use this Chocolate Cream Cheese Frosting.

As of June 2020, there are inexplicably still no vegan doughnuts available for sale at either Krispy Kreme or Dunkin Donuts, although the latter does offer Beyond Meat vegan sausage patties and almond milk on its menu.

But once you learn how easy it is to make your own donuts at home, you can turn your kitchen into your very own vegan Krispy Kreme factory and make as many flavors as you can dream up.

Serve the donuts for breakfast alongside a homemade Whipped Coffee, and you don’t ever even need to leave your pajamas!

For vegan glazed donuts, use the icing recipe below:

Or you can frost the vegan doughnuts with store-bought or homemade frosting, dip in cinnamon sugar, melted chocolate chips, or powdered sugar, ice with vegan cream cheese frosting and cover them in sprinkles, or serve them unfrosted for breakfast instead of muffins.

If you don’t have a donut maker or donut pan, the healthy donuts can also be made in a regular or mini muffin tin as long as baking time is adjusted.

Or you can buy a donut pan (they’re usually under ten dollars) on Amazon, Target, Walmart, Michaels, Bed Bath Beyond, or sometimes available in Whole Foods or regular grocery stores.

Above – watch the video how to make the vegan donut recipe

A super simple and delicious recipe for how to make vegan donuts at home. 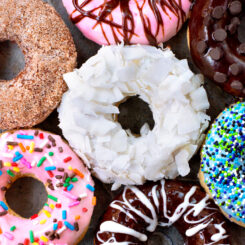 The donuts make a great breakfast with this Tofu Scramble Recipe. If you’re a visual person, be sure to watch the recipe video above. The vegan donut recipe works with white, all purpose, spelt, oat, or bob’s gf all purpose flour. I have not tried it with almond flour, coconut flour, or whole wheat flour, so feel free to experiment with other options at your own risk. 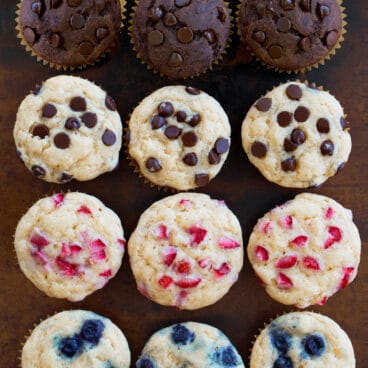