Sticky sesame cauliflower is the sweet, sticky, and addictively delicious dish that tastes like a better-for-you version of Panda Express!

A few weeks ago, I got a text from a friend saying his sister was trying to add more vegan meals to her diet and asking if I had any good tips.

The first advice I had was something I always recommend to anyone who wants to incorporate more plant-based meals into their diet, especially for non-vegans just trying to eat more meatless meals in general.

My first recommendation is to NOT replace meat with vegan meat substitutes, which can just set you up for disappointment when you expect one thing and get another.

Instead, think of it an opportunity to explore new recipes and look at vegetables and natural plant based ingredients in a whole new light.

For example, the popular Buffalo Cauliflower Wings are especially delicious!

So many people never venture further from preparing vegetables in a “mainstream” way, such as steamed or in a side salad.

But when you look at vegetables as the main event, it opens up a brand new realm of culinary possibilities.

Or start out by replacing up to half the meat in a recipe with a meatless alternative. Then you can increase the veggies a bit more each time you make the recipe.

The best part of sesame chicken has always been the sauce.

It’s the sauce, not the chicken, that makes you crave Panda Express every time you walk past the food court in the mall.

It’s the sauce, not the chicken, that makes sesame chicken so addictive.

And this healthy meatless makeover of the classic recipe keeps all the goodness of that sticky-sweet sesame sauce intact. Plus, since you’re not using a fake meat substitute, there’s no expectation—subconscious or otherwise—that the dish will taste like chicken.

Non-vegan dinner guests won’t be wary of trying a taste.

And then another taste…

And then one more…

Cauliflower, the darling vegetable of the year, is definitely having a moment.

And with more and more cauliflower-based products hitting shelves each day, the cauliflower excitement doesn’t show any signs of slowing down.

If you’ve read my blog for a while, you know I’ve loved cauliflower since long before it was trendy.

The following are just a few of the cauliflower recipes you can find on my blog.

I’m predicting cauliflower is going to be the most popular vegetable of next year as well!

Note: When I researched soy sauce alternatives online, I found a few comments who said you can combine one fourth cup of Worcestershire sauce with a tbsp or two of water to replace half cup of soy sauce.

I haven’t tried it, but if anyone successfully tries this or another option, please feel free to report back for other readers. 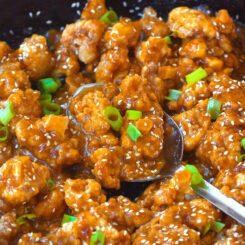 Leftover cauliflower? Use it up in this Cauliflower Alfredo Sauce!

Who Is Chocolate Covered Katie?