Here is the famous recipe for vegan cinnamon rolls that can absolutely hold their own against any non vegan version. People are always asking me for the recipe!

Trust me, you will absolutely not regret making this vegan cinnamon roll recipe, even if you have no interest in ever becoming a vegan.

They are the perfect recipe to make any time you have guests staying over, or for potlucks, brunches, birthdays, or simply for a leisurely family Sunday breakfast.

I’ve served the cinnamon buns so many times over the years to both vegans and non vegans. People always go crazy for them!

Plus, they make your entire home smell like you are walking through the aisles of IKEA.

You can definitely serve these rolls to a crowd without worrying. They are made with traditional ingredients just like regular cinnamon buns, nothing crazy.

(I see you, Avocado Chocolate Mousse.)

In fact, many big brands of packaged cinnamon rolls are accidentally vegan already, including Annie’s, Immaculate Baking, and Trader Joes (both their regular and pumpkin rolls are actually vegan!).

However, with both hydrogenated oils and food dyes, they’re not exactly healthy.

No Butter, No Eggs, No Corn Syrup

The vegan cinnamon roll recipe can also be made without vegan butter or coconut oil.

Low carb recipes are great and all (seriously, this Keto Cheesecake is amazing), but there’s just something about a hot-from-the-oven soft and fluffy homemade cinnamon roll, covered in cream cheese frosting, in all its carb filled glory.

Don’t worry, these are still much healthier than Cinnabon and yet completely satisfy even the most fervent cinnamon roll cravings.

There is also no need for a stand mixer or bread machine. While most of my recipes do include gluten free options, I haven’t yet tried these rolls with a gluten free flour such as oat flour, almond flour, or gluten free all purpose flour (gluten feeds yeast).

I would love to know if anyone experiments, and I am also working on a cinnamon roll recipe without yeast. So hopefully that one will be ready to publish soon.

How to Make the Best Cinnamon Rolls

If you can get the cinnamon roll dough just under 1/4-inch thick, that’s perfect. Thinner dough is better because it will rise and expand more than you might think in the oven, and starting with super thin dough ensures you will get sweet cinnamon sugar filling in each and every bite.

Trick 2: Roll them up as tightly as you can

The reason for this is the same as above: it distributes the filling more evenly and prevents large expanses of plain dough in the finished product.

My mom taught me this trick, and it forever changed the way I make cinnamon rolls. Once all the filling is spread on the dough, cut slices before rolling up and you won’t have to worry about filling oozing out.

It seems like such an obvious trick that I’m surprised so many recipes—including my own in the past—still call for rolling the dough first and then cutting with a knife, thread, or floss. This way is so much easier!

If you want hot cinnamon rolls first thing in the morning, just assemble the day before, then cover and refrigerate overnight.

The next morning, simply put the pan into the oven and bake 20 minutes. Frost as desired, and serve hot.

Leftovers can be covered and refrigerated for two to three days or frozen to reheat in the microwave or oven any time you are craving cinnamon rolls.

The recipe was inspired by this Cinnamon Roll Baked Oatmeal

4. For a less sweet version, feel free to leave them unfrosted, and the healthy cinnamon rolls will have a sweetness similar to a muffin, great for a healthy breakfast. The unfrosted version is especially good if you add raisins and walnuts to the filling.

5. And if you are feeling adventurous, you can turn them into Cookie Dough Cinnamon Rolls by filling the vegan cinnamon buns with Chickpea Cookie Dough Dip.

The famous recipe for vegan cinnamon rolls that can absolutely hold their own against any non vegan recipe! 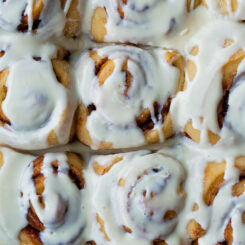 (With an oil free option)