This classic vegan apple pie recipe is everything you could ever want in a homemade apple pie, with delicious flaky pie crust and sweet apple filling in each bite!

If you’re looking for the perfect apple pie recipe to make for the holidays, this tried-and-true recipe will not let you down.

Because the pie is made with only traditional apple pie ingredients, it’s a fantastic holiday dessert to make for both vegan and non vegan guests, and everyone will be asking you for the recipe!

One bite of this completely delicious vegan apple pie, and you will never go back to store bought or canned filling ever again.

Whether it’s Thanksgiving, Christmas, the Fourth of July, or a regular Sunday evening, the pie is right at home for any celebration or special occasion.

Also have on hand a 9-inch pie pan, a large bowl for tossing the ingredients, and an optional apple peeler if you wish to remove the skins from the fruit before baking.

What kind of apples to use?

The type of apples you choose to use in a pie are important, because some apple varieties are not good at withstanding high heat and will turn to mush when baked.

Ideally, you want your apple pie filling to be tender yet crisp, and not too tart.

And I’d recommend not using Red Delicious because of their mushy flesh and tendency to quickly turn brown.

Can the recipe be sugar free or gluten free?

For a gluten free vegan apple pie, just be sure to use a gluten free pie crust and choose gluten free oat flour as the flour of choice in the filling. (I would think that a gluten free all purpose flour should also work in the apple pie filling, but I haven’t tried it yet.)

The pie can be made with regular sugar, unrefined coconut sugar, or evaporated cane juice. Or you can go with either granulated erythritol or xylitol for a vegan sugar free apple pie.

How to make vegan apple pie

Start by gathering all of your pie ingredients, and read through the recipe instructions.

Line a 9 inch baking pan with one of the two pie crusts, then set this aside. Preheat your oven to 425 degrees Fahrenheit.

Peel and slice the apples, toss in a large mixing bowl with all remaining pie filling ingredients, and transfer to the crust-lined pan.

The filling will tower over the top, which is what you want because the moisture and apple juice will release when baking and cook down. Place the second pie crust on top, and crimp the edges of the crusts together with your hands or a fork.

Cut a few slits into the top crust to allow steam to escape during baking. In order to prevent the edges from burning, I like to cover the outer rim of the pie pan with a ring of aluminum foil, leaving the center of the pie open.

Bake the pie on the oven’s center rack for 40 minutes or until the crust is lightly browned and the apple filling is hot and bubbly. Let it cool.

Loosely covered, the apple pastry can sit out overnight. After that, leftover pie can be covered and refrigerated for up to five days. Or you can freeze individual slices for three to four months to thaw and enjoy in the future.

The apple pie calls for a standard double pie crust.

Or you can use the following double pie dough recipe:

Stir in 1/4 cup cold water and form into a ball. Add more water if needed. Refrigerate around 15 minutes to cool, then divide into two equal balls.

Roll out the second ball of dough, and use this for the top of the pie. If you want to be fancy, you can cut the dough into strips for a lattice crust. I chose to make a regular crust this time.

Watch the step by step apple pie recipe video, above.

The recipe was adapted from my Healthy Apple Pie and this Vegan Pumpkin Pie.

This classic vegan apple pie recipe is the perfect holiday vegan dessert, with sweet apple filling in each bite. 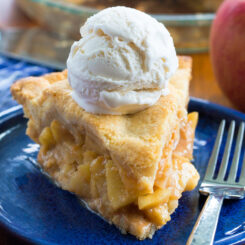