The best and easiest low carb and keto cheesecake – even people who aren’t on a keto diet LOVE this unbelievably creamy cheesecake!

There’s even a no-bake option!

I’ve gotten so many requests in the past few months to come up with a keto cheesecake recipe, and this one is so deliciously smooth and creamy, no one would ever believe it could possibly be low carb!

Eat it plain, or topped with strawberries or a scoop of Keto Ice Cream!

To test the final recipe and make sure it received the seal of approval even from people not on any special diet whatsoever, I sought out the toughest audience of friends who aren’t vegan, gluten free, or keto, and who don’t normally eat healthy desserts in general.

They all LOVED the cheesecake… so you know it must be really good! Their verdict was that if they hadn’t known the secret, they never would have guessed it wasn’t just like any other recipe made with traditional ingredients.

How To Make Keto Cheesecake

This keto cheesecake crust calls for almond flour as the base – if you don’t have any on hand, simply pulse raw almonds or pecans in a food processor until they turn to a flour consistency. Or you can use a different crust recipe or even make the cheesecake crustless if you prefer, and each slice will have just 200 calories and under 2 grams of net carbs.

You can use your favorite sweetener, such as erythritol or xylitol for sugar free. Regular sugar, maple syrup, and coconut sugar also all work in the recipe (it won’t be ketogenic but will still have much less sugar and fewer calories than traditional cheesecakes, while tasting just as delicious).

Baking Tips For The Best Cheesecake

No water bath is required, but I do like to put a baking pan with water underneath the cheesecake as it cooks, which adds moisture to the oven and acts as a further buffer against the infamous cheesecake cracking. If you want to skip the pan of water, or if your cheesecake does end up cracking for any reason, all is not lost: You can easily hide the cracks with a layer of fresh berries, whipped cream, or perhaps even some Healthy Nutella!

When you take the pie out of the oven, it should look underdone and jiggly in the center. The cheesecake will continue to firm up as extra moisture evaporates and it cools, and the next day you will have a perfectly textured cheesecake that is so rich and decadent, and so much better than anything you’ve ever eaten from Cheesecake Factory. If you make it, please feel free to leave a review below or post your photos!

If You Want A No Bake Option:

For a no bake cheesecake, simply replace 1/2 cup of the yogurt with coconut butter or coconut oil. Instead of baking, just chill the cheesecake until firm. Store leftovers in the refrigerator.

I hope you love this cheesecake as much as we all do!!!

How to make the best easy low carb keto cheesecake with just a few ingredients. 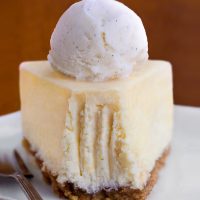 You are here: Home / Healthy Pies and Cakes / Keto Cheesecake 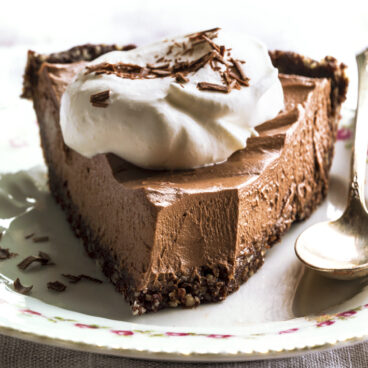