You will love these delicious chocolate brownies, made with NO black beans, no tofu or dates, no butter or coconut flour, and no eggs or flax eggs.

I also like making brownies with unusual ingredients, and my Sweet Potato Brownies are super popular with readers.

But sometimes what you want is a budget friendly, basic gooey brownie recipe with simple ingredients and nothing you need to order on Amazon or make a special trip out to Whole Foods to find.

And sometimes what you’re craving is the fudgy chocolate brownies you remember from childhood, just with better-for-you ingredients that let you indulge more often.

This is the ultimate best vegan brownie recipe for these occasions, with the stamp of approval from even hardcore carnivores.

Can you make brownies without eggs?

The biggest challenge with vegan brownies is binding them together and adding moisture without the use of eggs or dairy.

Many of the vegan brownie recipes on the internet call for flax eggs, aquafaba, or ground chia seeds as an egg substitute. Others use silken tofu to add moisture.

These ingredients do work wonders in vegan baking, and I highly recommend you try them out sometime if you haven’t already. But not everyone has flaxmeal or chia seeds on hand when asked to make a last minute dessert for a party or for a vegan friend.

So today, I wanted to come up with a recipe that calls for only pantry staple ingredients and still yields chewy, moist, and sinfully rich chocolate brownies.

If you do feel adventurous, be sure to try my Black Bean Brownies.

They are the most popular gluten free and vegan recipe I’ve ever published, with over 3,000 reviews and 5 million shares across social media.

Or if you want a decadent single serving chocolate brownie that can be made in the microwave in under five minutes, whip up this plant based Brownie in a Mug.

Can vegans eat brownies? As the above recipes prove, the answer is absolutely yes.

If you cannot find Dutch process cocoa, it is fine to use a full cup of regular unsweetened cocoa powder. However, for the most authentic boxed brownie flavor, I recommend including the Dutch cocoa if you can.

Spelt flour is my personal favorite for these vegan brownies. Gluten free or white all purpose flour or oat flour also work. Do not substitute coconut or almond flour here.

There is a sugar free and keto brownie recipe included in the recipe box below for those who wish to make paleo brownies with almond flour.

Vegetable oil, sunflower oil, or melted coconut oil are all good options for vegan baking. Substituting the oil with banana or applesauce is not recommended, because it will yield dense and gummy brownies that lack depth of flavor.

The pictured brownies are topped with a scoop of Coconut Ice Cream.

Or serve the chocolate fudge brownies plain or topped with sliced strawberries, cherries, or raspberry jam and Coconut Whipped Cream.

You can also top them with store bought chocolate frosting (many brands are surprisingly vegan), plant based caramel, Homemade Nutella, or the following easy chocolate ganache: 1/2 cup cocoa powder, 2 tablespoons pure maple syrup or agave, and 1/2 cup virgin coconut oil, melted. Stir ingredients together to form a thin sauce. Spread over the brownies, and refrigerate or freeze 20 minutes to set.

How to make vegan brownies

Whisk the water, oil, and vanilla extract. If using flaxmeal, whisk it in as well. Set aside.

Preheat the oven to 330 degrees Fahrenheit, and grease a baking pan or line the bottom of the pan with parchment paper. For thick brownies, use an eight inch pan. For thinner brownies, opt for a standard nine by thirteen inch baking pan.

In a large mixing bowl, stir all remaining ingredients very well. Then mix in the liquid ingredients to form a vegan brownie batter.

Use a spatula or spoon to smooth the chocolate batter into the prepared pan. Place the pan on the center rack of the oven, and bake for sixteen minutes. (Increase the cooking time to twenty four minutes for brownies in an eight inch pan.)

The vegan brownies should look under-baked when they come out of the oven. Let them cool, then refrigerate uncovered. They firm up after a few hours, and the flavor and texture are so much better the next day.

For freshness, store leftover brownies in the refrigerator, uncovered or very loosely covered the first night, then fully covered in an airtight container for up to four days.

You can also slice and freeze leftovers with a sheet of parchment paper in between layers of brownies so they do not stick together. Warm up or thaw before serving.

This rich and fudgy homemade vegan brownies recipe is easy to make with pantry staple ingredients. 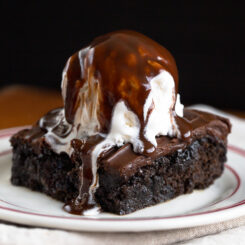 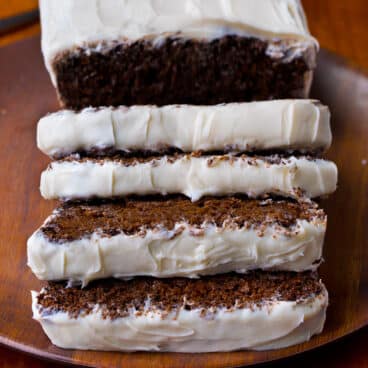 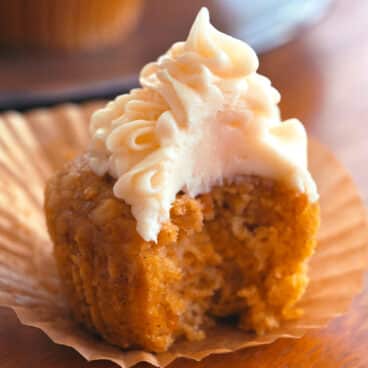 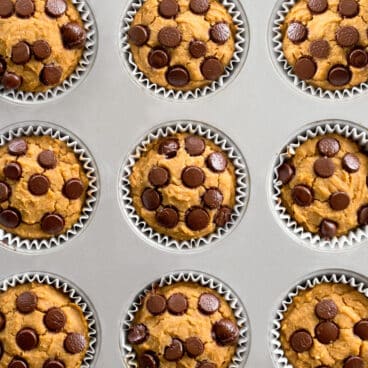 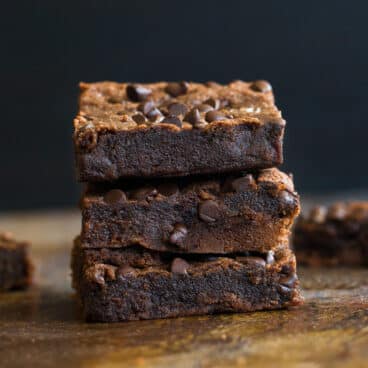